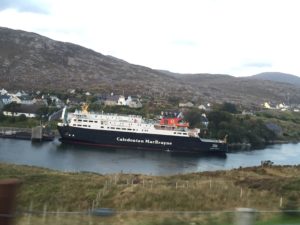 Foretract received an urgent call from the MV Hebrides that runs between Uig on the Isle of Skye and the Outer Hebrides.

The ship’s engineers had noticed a broken cylinder head stud, but the engine was still running without problem. The Foretract engineer who was working at Plymouth when the call came in, drove the 700miles to Uig (collecting additional equipment from our workshop while passing Penrith). On arrival he sailed with the ship to Tarbert where it was berthed overnight.

Within 3 hours of arrival Tarbert the broken cylinder head stud had been removed from the bottom of the entablature pocket without removing the cylinder head. A new stud was fitted and tightened down using the manufacturer’s procedure.

Foretract’s fast response meant that the ferry didn’t miss any crossings or cause delays to timetables.