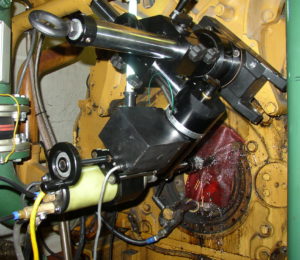 A leading power supply company which uses methane engines on landfill sites approached Foretract with a problem.These V16 generators produce about 1200KVA. A number of studs holding the damper (approx 90kg) onto the end of the crankshaft had siezed into the crankshaft threaded holes.These studs needed to be removed in order to allow the removal of the damper to to replace the crankshaft oil seal, which was leaking.

Foretract Engineering carried out an on site survey and produced a method statement for the removal of the seized studs using their specialist metal disintegration skills.

A precision electrode was machined in our workshop to suit the stud size together with other special mountings etc.

The seized stud was removed with no damage to the crankshaft hole. The entire operation including removal/replacement of the balance weight and seal can be carried out in one day, therefore reducing down time and the resulting lost revenue to the power company.