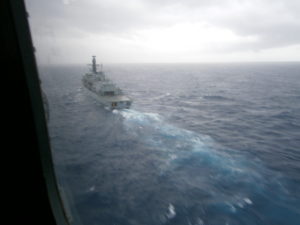 The requirement, to remove a broken cylinder head stud from one of its main Paxman propulsion diesel generators, which was out of action.

A Foretract engineer mobilised to the Seychelles the following day carrying with him the lightweight stud removal kit. On arrival at the Seychelles he was transferred 100miles offshore to the frigate by the ships Lynx helicopter. The engineer worked on the engine overnight and returned to the island by helicopter the next morning.