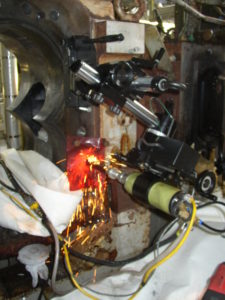 Contact was made with Foretract Engineering by a major chemical company based near Manchester at 0830hrs.

They had an emergency unplanned shut down taking place. The bearings in their main plastic pellet extrusion pump had failed. Engineers from the pump manufacturer had arrived on site with replacement parts and stripped the pump. Three M42 studs holding on the side covers had to have the heads cut off, as they had seized in the housing. Photographs and dimensions were E- mailed to our offices in Cumbria, a method statement was produced while electrodes and alignment bushes were machined in our workshops. Foretract Engineering staff were on site by 1500hrs. Before work commenced a full site risk assessment was completed. While removing the three M42 studs it was discovered that two M16 studs also needed removing. By 0200hrs on the following morning all the damaged studs has been removed and the pump unit was ready for reassembly.