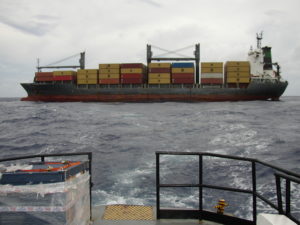 The Container vessel MV Prospects had snapped a cylinder head stud on her main engine an RTA62, a large slow speed two stroke.
The vessel was on her way to the container terminal at Grand Bahama. Despite the best efforts of the ship’s staff, they had been unable to remove the stud while on route. Foretract personnel arrived with equipment air freighted into Grand Bahama and was then taken out to the vessel along with 2 Foretract Engineers by crew boat while it drifted offshore.
On arrival at the vessel Foretract Engineering’s portable equipment was set up over the broken piece of stud still remaining in the engine entablature. A 1” square was then machined in its centre to enable it to be driven out using a purpose made driver. The stud was replaced and cylinder head tightened to manufacturer’s specification. Foretract Engineering staff left the vessel less than 24 hrs after arrival on board.