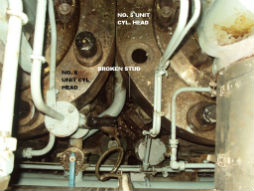 A Foretract technician attended a tanker at Singapore anchorage to remove a broken cylinder head stud from the exhaust side of the 600mm bore 2 stroke engine. Direct access to the stud hole was not possible due to pipe work, cable trays etc. Normally this job would require the removal of cylinder head, piston and liner to gain access.

The new remote equipment that has been specially developed in house for use in this situation, allowed the technician to remove the broken stud and replace with new in 6 hours without the removal of any parts from the engine.